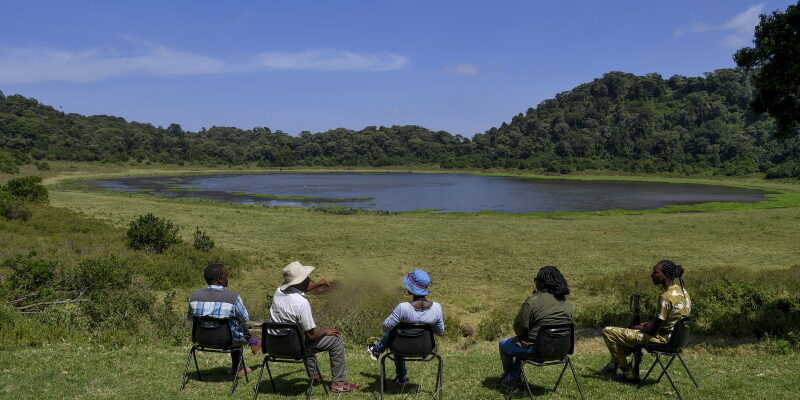 The Marsabit National Park & Reserve lies in northern Kenya, about 560km north of Nairobi in Marsabit district. The park comprises of densely forested mountain and three crater lakes that are the only permanent surface of water in the region and that provide habitat for a variety of birdlife. Major wildlife attractions include the African elephant, the endangered Grevy’s zebra, lion, leopard, buffalo, bushbuck, large herds of greater and lesser kudus, common zebra, grant’s gazelles and many other small antelopes. The park is famous for its elephant named Ahmed that was provided with 24hr security surveillance by presidential decree in the 70’s, to demonstrate Kenya’s commitment to wildlife conservation.

How to get to Marsabit National Park

Distance: 560 km north of Nairobi.263 km north of Isiolo.
Gates: 2 Gates;Ahmed and Abdul.
Roads: from Nairobi, the reserve is reached via Nanyuki and lsiolo a distance of 620 km. The road is paved up to lsiolo leaving a distance of 270 km of very bad road that is only motorable by 4 wheel-drive vehicles during the dry season.
By Air: there is an airstrip at Marsabit, 4km from the Park’s main gate.
Airstrips: The reserve is 2 1/2 hrs by air from Nairobi and is adequately served by a tarmac airstrip located about one kilometer from Marsabit town centre.

The Marsabit National Park is an oasis of green in this arid, desert region of Kenya. At the centre of the park is an extinct volcano – the height of which creates a microclimate that supports a huge tract of indigenous forest that in turn supports a wide variety of wildlife. The Montane forest is supplied water by thick mist which forms overnight as the hot air rises off the desert and cools. The mist often lingers till late morning.

The forest is home to a wide variety of wildlife such as Elephants, Rhino, Lion, Buffalo and Leopard. The downside of Marsabit is that the forest is so thick that game viewing is very challenging. However, it can be very rewarding if you have patience. The Park is home to the greatest number of graceful Greater Kudu Antelope and the rare Grevy’s Zebra and Reticulated Giraffe.

The park has many extinct volcanic craters known as Gofs. One of the largest of these is Gof Sokorte Guda which has Lake Paradise at the bottom of it. The lake is ringed with scenic forest and the birding is fantastic. It is also a refuge for the rare Lammergeyer Vulture and is known for the diversity of its butterfly species.

Jan-Mar is hot and dry, April-June is hot and wet,July-Oct is very warm and dry, November and December are warm and wet.

What you expect to see – Attractions

What animals to expect at Marsabit National Park

Camping
2 public campsites, Ahmed Campsite is located by the main Ahmed Gate some 3.2 km from Marsabit lodge. Abdul Campsite located by Absul gate and is close to Park HQ
Special Paradise Campsite: a grassy clearing on the shores of Lake Paradise.

What to do at Marsabit National Park

Game viewing.
Ornithological (bird watching safaris
Camel safaris to neighboring plains (this activity can be conducted by the local people);
Visiting to “singing wells’ where local people engage in songs while drawing water from deep wells to water livestock.

What to take with you at Marsabit National Park