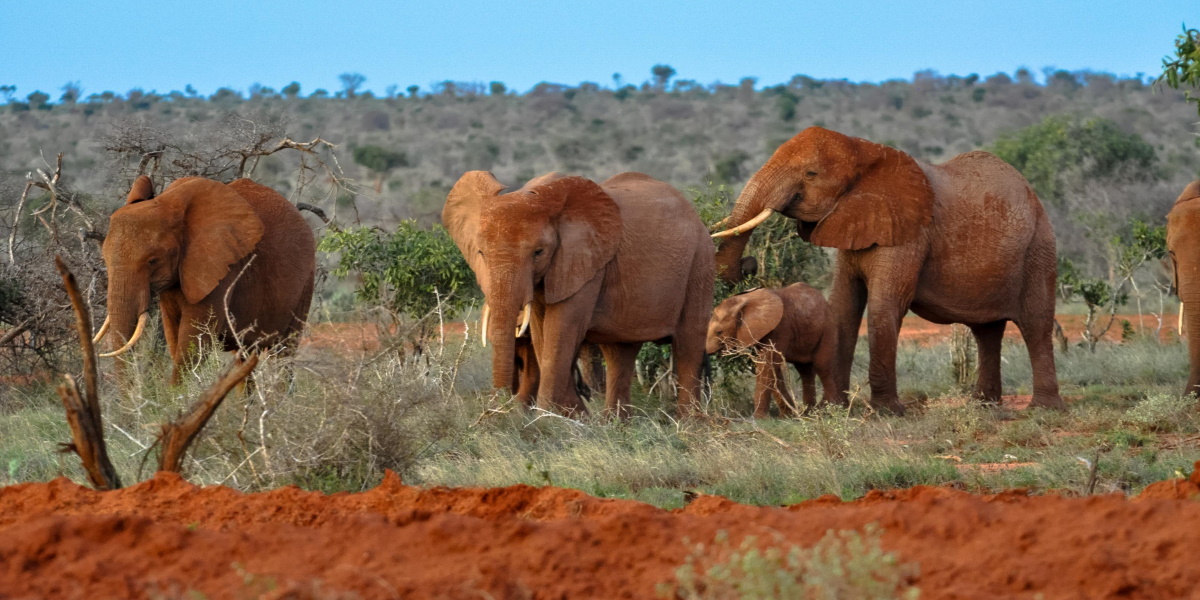 The joint mass of Tsavo West and Tsavo East National Park Kenya forms one of the largest National Parks in the world and covers a massive 4% of Kenya’s total land area.

Tsavo East National Park is one of the oldest and largest African safari parks in Kenya. It was established in 1948 and covers 11,747 km², although not all of the park is open to the public.

Some areas are designated as “remote animal wilderness” for the Kenyan animals, but there is still a massive area for visitors to tour around and enjoy viewing the Kenyan wildlife. Key attractions include the Galana River and the Yatta plateau, as well as several pools and dams used as watering holes by both birds and animals.

Tsavo East, the larger of the two, lies to the east of the Nairobi – Mombasa road, equidistant between Nairobi and Mombasa, and offers a vast and untapped arena of arid bush which is washed by the azure and emerald meanderings of the Galana River, guarded by the limitless lava reaches of the Yatta Plateau and patrolled by some of the largest elephant herds in Kenya.

In 1898, long before Tsavo National Park was created, a pair of maneless male lions terrorized the area. They reputedly killed 135 railway workers who were building the Kenya-Uganda railway. These man-eating lions dragged men from their tents, despite the thorn fences (bomas) built to keep them out. The maneless lions evaded traps and ambushes and were finally shot by Lt. Col. John Henry Patterson.

Tsavo East National Park is 333km south-east of Nairobi, and 173km north-west of Mombasa. Its relative closeness to the beaches and tourist attractions around Malindi and Mombasa make it an ideal one-day wildlife safari destination for those who do not want to stay overnight.

Tsavo East National Park is a natural area of flat, dry plains, with thorny bushes and swampy marshland near the river. It is teeming with diverse Kenyan animals including large families of giraffes, gazelles, hartebeests and zebras, as well as the “Big Five” must-see animals – buffalo, African elephants, lions, rhinos and leopards.

Although it is a popular African safari wildlife park, it is very rare to see other traffic except under certain circumstances when viewing the wildlife. The guides communicate with each other by radio if they find something unusual, such as a pride of lions, and there may be a sudden convergence of vehicles to the site, but they soon disperse again. The best time to view the wildlife is early or late in the day, as the animals tend to sleep in the hot midday sun.

The park is open from 6.30am to 6.30pm daily, and the wardens at the gate give visitors a few sensible rules: do not get out of your vehicle, except at designated spots; do not harass the animals in any way; keep to the tracks; no off-road driving; and remember that the animals always have the right of way.

Suitable dress for a day’s wildlife safari to Tsavo East National Park should include loose, cotton clothing and a sunhat. Binoculars, cameras and sunglasses are essential. It is also a good idea to carry a bottle of water, frozen overnight, for you to sip during the day. As it melts, it makes a delicious drink to help you avoid dehydration in the heat. Don’t forget to enjoy the sights in real-life, not just through the lens of your camera or video recorder!

There are rest areas with restrooms and water fountains. The safari viewing lodges also provide excellent buffet lunches while you enjoy watching the animals through the huge panoramic windows. There is also a camouflaged hideout where you can view the African elephants at the watering hole.

Kenya lies across the equator, and Tsavo East National Park is just a few degrees latitude south. The temperature is fairly constant year round, but the rainfall varies. The tropical temperature ranges from 27-31°C (81-88°F) in the daytime and 22-24°C (72-75°F) at night.

The long rainy season in Kenya lasts from March to May and the rainfall is heavy, making this a bad time for wildlife safaris. The short rainy season lasts from October to December, but the weather during this period is still good enough to go on safari – just expect some afternoon showers. The humidity is high from December through April.

How to get to Tsavo East National park

By Road: Use your own vehicle, take public transportation, or book an open-topped minibus tour with a tour guide. Enter from Nairobi (333km) via Voi Gate or Manyani Gate; enter from Mombasa (173km) via Bachuma Gate; enter from Malindi or the north coast via Sala Gate.

By Railway: The Nairobi-Mombasa railway runs right through the Tsavo East National Park.

What to see and do at Tsavo East National Park

The main purpose of a wildlife safari is to see Kenyan animals in their natural state. It never ceases to surprise people when they see birds perched near crocodiles, or gazelles grazing near big cats; however, the truth is that predators generally only kill to eat and, otherwise, the animals live together in harmony.

Lugard’s Falls is a series of rapids on the Galana River where crocodiles love to bathe.

Mudanda Rock is a 1.6km outcrop of rock, with a dam at its base. This is a popular drinking place for animals.

Aruba Dam also attracts animals and birds looking for a place to drink.

Walking safaris are offered by several guides along the Galana River.

Ngulia Rhino Sanctuary is saving the black rhino from extinction due to hunting by poachers.

Bird watching is best between October and January, with many migratory birds including: African skimmers, red and yellow bishops, goshawks, buffalo weavers and palm nut vultures, to name but a few. Over 500 bird species have been recorded in the park, including ostriches, kestrels, buzzards, starlings, weaverbirds, kingfishers, hornbills, secretary birds and herons.

Accomodation – Safari lodges in and around Tsavo East

Since Tsavo East National Park is only 156km (97 miles) from Malindi and 173km (108 miles) from Mombasa, most people stay in the Mombasa beach resorts and hotels along the coast, visiting Tsavo East for a wildlife safari during the day and returning to their hotels in the evening.

For those wanting to stay overnight in the park, there are several accommodation options available. Moderately priced Kenyan lodges near the park include Voi Safari Lodge and Voi Wildlife Lodge. Both lodges are popular with travelers due to their close proximity to the Nairobi-Mombasa highway.

Public campsites do not have any facilities, and you must provide all of your own camping gear. These include Ndololo, Kandri and Main Gate campsites.

January and February are good months to visit, as well as June to September. Avoid visiting between March and May as this is the heavy rainy season. There may also be some rain from October to December. Temperatures year round are 27-31°C (81-88°F) during the day and 22-24°C (72-75°F) at night.

For birdwatchers, the best months to see Kenya’s migratory birds are October to January. The best times to view wildlife are early and late in the day, as animals tend to sleep in the hot midday sun.

The above rates change from time to time. You can view the latest rates and fees charged to Kenya citizens and non-citizens, as well as the rates for vehicles entering the park.

Where to book your Tsavo East National park Kenya Safari

You can drive to the park and buy a ticket at the gate. If you are staying in one of the lodges, you can book a wildlife safari at your hotel’s travel desk.

There are also reputable online and traditional travel agents and Kenya tour companies who will book a guided, all-inclusive Kenya animal safari tour for you before your arrival. These Kenyan safaris normally include accommodation, travel to the park, park fees, English-speaking tour guides, food and other activities to encapsulate that memorable experience in Tsavo East and any other African safari in Kenya.