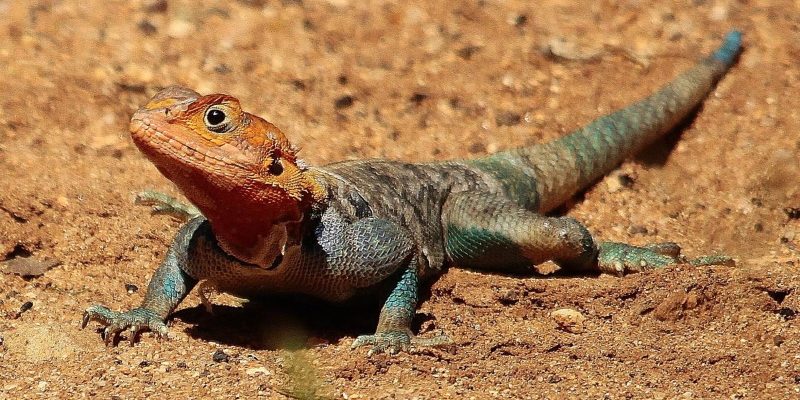 The Tsavo West National Park is “Full of wild beasts, such as rhinoceros, buffaloes and elephants” from a missionary’s diary written in 1848.

Later in 1900 the notorious “Man Eaters of Tsavo“, man-eating lions preyed on linesmen building the great Uganda Railway in 1900. The carriage from which they pulled a traveler is on display at the Nairobi Railway Museum.

Tsavo-West National Park has important historic connections as a major battleground in World War I where British and German troops battled for supremacy.

The park, located off the main Nairobi-Mombasa road is easily accessible. It offers tremendous views with diverse habitats ranging from mountains, river forests, plains, lakes and wooded grassland. It borders the southern Serengeti plains in Tanzania.

There are many tourist attractions at Tsavo West National Park, from safari tours to see the red-skinned elephants, to birdwatching and hill hiking, to caving and boating. There are many Kenyan animals in the park, including elephants, African lions, hippos, cheetahs, hartebeest and buffalo.

Tsavo West National Park covers 7065km² but the terrain is much more varied than that of Tsavo East. It ranges from 200-1000 m in altitude. The northern sector is bush land with scattered native baobab trees.

The railway runs along the border separating Tsavo East and Tsavo West National Park. In 1898, as many as 135 railway workers were attacked and killed by man-eating lions. The pair of male, maneless lions that, unusually, hunted humans rather than livestock, evaded traps and capture for many months. The man-eaters were eventually shot by Lt. Col. John Henry Patterson, but the legend lives on.

A wildlife safari is the best way to see Kenya’s wildlife close-up in its natural environment. Tsavo West is home to the largest population of red-skinned elephants as well as to members of the rest of the “Big 5” African animals (buffalo, African lions, leopards and rhinos). There is also a host of Kenyan birds and other animals, both large and small, to see.

From Lake Jipe, on the Tanzanian border, to the mountain forests of the Chyulu Hills, the wide range of landscape offers protection to many endangered African wildlife including the black rhinoceros, Cosen’s gerbil, Hunter’s hartebeest, several species of shrew and rat, Grevy’s zebra and wild dogs.

Upon entering Tsavo West National Park, the park warden will give you several commonsense rules. For example: do not get out of your vehicle, except at designated spots; do not harass the animals in any way; keep to the tracks; no off-road driving; and remember that the animals always have the right of way.

When driving along the red-earth tracks, keep your eyes open for movement and signs of African wildlife. The more you look, the more you will see, and it increases the camaraderie and excitement of the trip as you point out the wildlife, and pull to a halt. Don’t forget to enjoy the sights in real-life, not just through the lens of your camera or video recorder!

It is amazing to see Kenyan wildlife living in close proximity to one another. A bird may sit within a snap of being eaten, yet, unless it is hungry, the predator will ignore it completely. See the huge anthills, the sparse shrubs, and the tortoises plodding along the edge of the track. Keep your eyes open for giraffes – they are surprisingly well camouflaged as they nibble the tops of the trees. Look under the shady trees to find lions sleeping after lunch, and be ready to stop as gazelles or cheetahs stroll across the road in front of you.

It is a long, hot day on a safari to Tsavo West, so wear cool, comfortable clothing, and a sunhat. Remember to bring your camera and binoculars, sunglasses and water to drink.

How to get to Tsavo West National park

If you prefer your vegetation green instead of brown, and want a clear view of Kilimanjaro, then the Wet season (October to May) is when you’ll want to visit. Migratory birds also offer a great spectacle at this time. But for wildlife watching in general, you should really go in the drier months, when a lack of water sees animals gather at local rivers and waterholes.

Tsavo West National Park is just a few degrees south of the equator. The temperature remains the same throughout the year at 27-31°C (81-88°F) during the day and 22-24°C (72-75°F) during the night. Humidity is high from December through April.

The rainfall defines the seasons. The long rainy season, or monsoon season, is from March to May. The shorter rains come in October through December.

Accomodation – Safari lodges in and around Tsavo West National park

January and February are good months to visit Tsavo West, as well as June to September. Visiting during the heavy rainy season of March to May should be avoided as the roads become very muddy. There may be some rain from October to December. Temperatures stay at a pleasant 27-31C (81-88F) during the day and 22-24C (72-75F) at night year round.

The best months for birdwatchers to see migratory birds are October to January. The best times to view the park’s animals are early and late in the day, as they tend to sleep in the hot afternoon sun.